I was craving something sweet to drink. I wanted a milkshake. Not just any milkshake, a beet shake.  Okay…so who in their right mind drinks beet milkshake?  I do.

Ingredients for 8oz Beet Shake: half of a beet, 4oz water, 4oz carnation milk, teaspoon vanilla essence, teaspoon almond essence, a blender, a strainer and lots of condense milk…make it creamy and sweet. This is deadly on the hips…but sooo good. You would be surprised at how good it taste. I treat myself to it once a month…builds up the blood.

I hate eating beets. I’ve always told my mother that it is one of the worst tasting vegetables on the planet. It has an after taste that I just can’t stand. However, if you mix the ingredients of my beet milkshake recipe…mix that baby with dairy, some vanilla and almond essence, you end up with something so heavenly that you have to put your feet up to drink it. Well I am exaggerating here, but it’s really good.  Ha Ha He He

So what does my milkshake recipe have to do with making money?

Well, here’s the deal…there are over 49,000 people searching every single month looking for milkshake recipes…all kinds of flavors.  If you thought my beet milkshake was weird, you might throw up when I tell you that people are searching for avocado milkshakes too.  Oh hell no!  Avocado milkshake?  Uhmmm…that would not touch my lips.  (Laughing Out Loud).

You can create one video per day, for example….peanut butter milkshake recipe.  You can create a Youtube account, keyword optimize and upload the videos daily so that people would find the videos and link the videos back to your blog, and also embed that same video on your blog.  Add the recipe below the embedded video on your blog and also add a paragraph or two. You can see your traffic increasing month after month.  Your next step would be to recommend a few related products like the…


“Will It Blend,” Blendtec blender

.  You must first become an affiliate of those products and you would get a commission whenever a blog visitor purchases your recommended products. Make sure you either test out the products yourself or check out the review page to make sure it’s a good product. Make sure there are way more positive reviews than negative. That is just one way to profit from milkshake recipes.

Below, I thought I’d share with you this article from the NY Times.

Who Put the Whiskey in My Milkshake?

THERE is bourbon in the Bourbon Street milkshake, served at Brooklyn Bowl, the loud, slick palace of fun that opened last year in Williamsburg. There’s also a sizable gobbet of Nutella, its nutty richness meant to evoke pralines — and by extension New Orleans, and by further extension the wild time you might have in New Orleans but are now presumably having in Brooklyn. And, of course, there is ice cream — the good stuff, with egg yolks and real vanilla, certainly better than anything you’ve ever eaten in a bowling alley.
Enlarge This Image 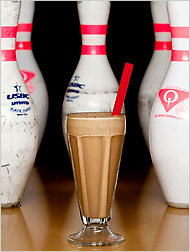 One sweet item at Brooklyn Bowl is for adults only.

The shake, like the rest of Brooklyn Bowl’s food offerings, was conceived by the Bromberg brothers — Bruce and Eric — of Blue Ribbon restaurant fame. From the very beginning of the project, Bruce Bromberg said, they knew they wanted a spiked shake.

How could there not be a boozy shake on the Brooklyn Bowl menu, a grab-bag of high-toned versions of every fried and melty thing your parents once frowned at? The menu was designed, he said, with “childhood memories of birthday parties” in mind.

In a culinary landscape teeming with art-directed burger joints and endless fancied-up takes on mac and cheese, maybe it’s time to welcome a new kind of “fusion” cuisine: childhood fusion. Where the original fusion boom of the 1980s had chefs ransacking Asia, now the place to find inspiration is over on the kids’ menu. Ice cream. Plus liquor. Together. In a big glass. Could there be a better emblem of the sort of juvenilia-with-a-wink that defines the current food aesthetic?

As anyone who has survived a frozen mudslide could tell you, the spiked shake is anything but a new idea. But it seems to be experiencing a sudden uptick in ubiquity, respectability and, here and there, craftsmanship.

Some have taken the concept further than others. At Ted’s Bulletin, a four-month-old Art Deco-themed place in Washington, customers walk in to discover a “shaketender” mixing away at a dedicated station.

Much of the credit (or blame) for this phenomenon probably goes to BLT Burger, which pioneered the idea of a “milkshake program” when it opened in New York four years ago. The shakes have remained a signature of the restaurant, though the founding chef, Laurent Tourondel, has not; he left the BLT group last March.

Mr. Tourondel apparently remains attached to liquor-laced shakes, however: last week, his former colleagues served him with a lawsuit for offering, in the restaurant he now runs in Sag Harbor, N.Y., a menu that they thought was overly similar to that of BLT Burger. It may be the first legal action in which spiked milkshakes play a role: the paperwork filed in federal District Court in Manhattan says that one of the items Mr. Tourondel has replicated is BLT’s bourbon-laced Grandma’s Treat.

That shake is a favorite of Fred Dexheimer, a certified master sommelier who helped Mr. Tourondel hatch the original shake menu. (“I got teased a little bit by my colleagues,” he said. “ ‘MS means Master Shake-maker,’ things like that.”)

The fact is, Mr. Dexheimer noted, alcohol and ice cream play very well together. All those syrupy liqueurs, anathema to the classic cocktail crowd, come into their own when used judiciously in shakes. And the harder stuff reveals depths of sweetness.

“The inherent flavors of bourbon are vanilla and caramelization from the barrel,” he said.

The shake will remain on the daily Milk Bar menu, along with a salty pistachio flavor, spiked with butterscotch schnapps. (“Butterscotch schnapps,”” Ms. Tosi marveled. “That’s so gross. I would never drink that. But in the shake it does amazing things.”) Two other flavors will rotate in, depending on the soft-serve options. (Opening week saw a rather alarming combination of barbecue-sauce ice cream, pineapple juice, honey syrup and cayenne-spiced tequila.)

Where Ms. Tosi ramps up the kitsch factor, Mariah Swan seems to be trying to strip it away. For the last two years, Ms. Swan has been presenting monthly milkshake events at the Los Angeles restaurant BLD, where she is pastry chef. Served in flights of three, her shakes pair top-shelf spirits with homemade ice cream: her repertory includes bourbon with chicory cardamom, añejo tequila with dulce de leche, and Cherry Heering with lavender vanilla.

They’re adult shakes in the best sense of the term. But still, unavoidably, they come from childhood. Discussing her milkshake inspirations, Ms. Swan singled out one at the Bob’s Big Boy franchise that she would eat while growing up in Glendale, Calif. (though only when she was “very good”).

“You had to eat it with a long spoon,” she said. “It was on a little plate with a napkin, and you got the whipped cream and the cherry. It was in no way the best milkshake ever, but it was such a treat. And that’s what I want to keep going, that kind of splurging and everything that goes with it. Keeping it special.”

How to Become a Travel Writer – Get paid to travel

I am a work at home mom of three boys, real estate investor, small business owner, internet marketer, and the owner of e-Businessmoms.com. My passion in life is to help especially other moms to achieve their goals in owning a successful business online and offline.

Work From Home For Fortune 500 Companies…

How To Make Money From Home As A Dog Host

hi there people its my first post so thought i would say hello.

Didn’t know you could do that with beets. This recipe seems fattening though. I am still game to try it. Thanks.

Commonwealth Of Dominica – Our New Home!

Money Saving Tips – Get Rid Of Your Cable TV!

Wash Hair Without Shampoo – Why I Have Not Shampooed My Hair In Over 3 Months!

How To Quickly And Easily Record Your Computer Screen

How To Stop Gray Hair From Growing

Choose From Over 20 Categories And More Than 500 Posts

Gray Hair Treatment – Gross! Parasites In Your Scalp Can Cause Hair To Gray

How To Lower Your Electric Bill